When the Corona-measures were proclaimed on Thursday 12 March, it felt unreal at first. The next day the world premiere of Willem Jeths’ opera Ritratto at Dutch National Opera was cancelled. I had looked forward to this very much, as to the other productions in the Opera Forward Festival of which this was the opening. Meanwhile I was busily preparing countless pre-concert talks in the coming months. In one fell swoop everything was cancelled until 1 June. Somewhat disbelievingly, I left for my ‘dacha’ in the country: it wouldn’t really be that bad, would it?

The rest is history as they say. For it was as bad, and even worse. From working in tenth gear I suddenly had to shift down to one. I decided at once to finally start reviewing the huge pile of CDs on my desk, under the title #Corona-classics. Yet instead, I made long biking and hiking trips; the sudden absence of deadlines and obligations made my initiative melt away: it felt like a holiday.

Upon returning home I found increasingly disturbing press releases in my mailbox. One festival after another after the date of doom was scrapped. – Even the Gaudeamus Music Week, that had planned a grand celebration of its 75th anniversary in September. Many organizations do come up with online alternatives, but these are a mere surrogate for a live experience. What’s more, they don’t programme pre-concert talks. After the press conference of Prime Minister Rutte on 6 May, it is even doubtful whether my already booked gigs for the next season will continue. Which concert hall can survive on a maximum of 100 visitors?

Therefore I have decided to flip the switch. Looking anxiously to the future and having a mandatory holiday is no life. Today I will start my series #Corona-classics after all. Starting on a cheerful note in these frightened days: the chamber opera Le dernier sorcier (The Last Magician) by Pauline Viardot. In her days (1821-1910) she was a world famous mezzo-soprano, teacher and composer. She wrote her delightful opera in 1867 on a libretto of her bosom friend/lover Ivan Turgenev.

This tells the story of Krakamiche, ‘the last magician’ from the title. He has lost his magical powers and lives with his daughter Stella in a miserable hut. It stands in the forest that Krakamiche once took away from the elves, when he was still a powerful man. They constantly bully him and laugh at his powerless rage. When Stella, to his annoyance, falls in love with Prince Lelio, the Fairy Queen comes to the rescue of the couple: she gives Lelio a flower that makes him invisible.

As is want in fairy tales, everything eventually turns out fine. Stella and Lelio are allowed to marry and Krakamiche expresses his regret about his former misdeeds. The forest returns into possession of its rightful owners, the natural order is restored.

In 1863 Viardot had said goodbye to the opera stage and moved to Baden-Baden, Turgenev taking suit soon after. Four years later she composed Le dernier sorcier. Viardot made a setting for piano, six singers and a choir, that is as effective as it is appealing. It aptly exemplifies why she was widely admired for her large vocal range and dramatic eloquence. Viardot inspired composers such as Hector Berlioz, Charles Gounoud and Camille Saint-Saëns. Moreover she was a gifted pianist, often playing duets with Chopin. With his consent she even made song arrangements of several of his mazurkas.

Le dernier sorcier premiered on 20 September 1867 in Turgenev’s villa in Baden-Baden. Viardot herself played the piano, her four children and two students sang the roles. Among the guests were Liszt, Brahms, Clara Schumann and even Kaiser Wilhelm I, who called the opera ‘a treasure’. Two years later Liszt helped realise a professional premiere at the Court Theatre in Weimar. This was received less positively however. Reviewers criticised the translation of the libretto into ‘cumbersome German’, and the unwieldy arrangement for symphony orchestra. 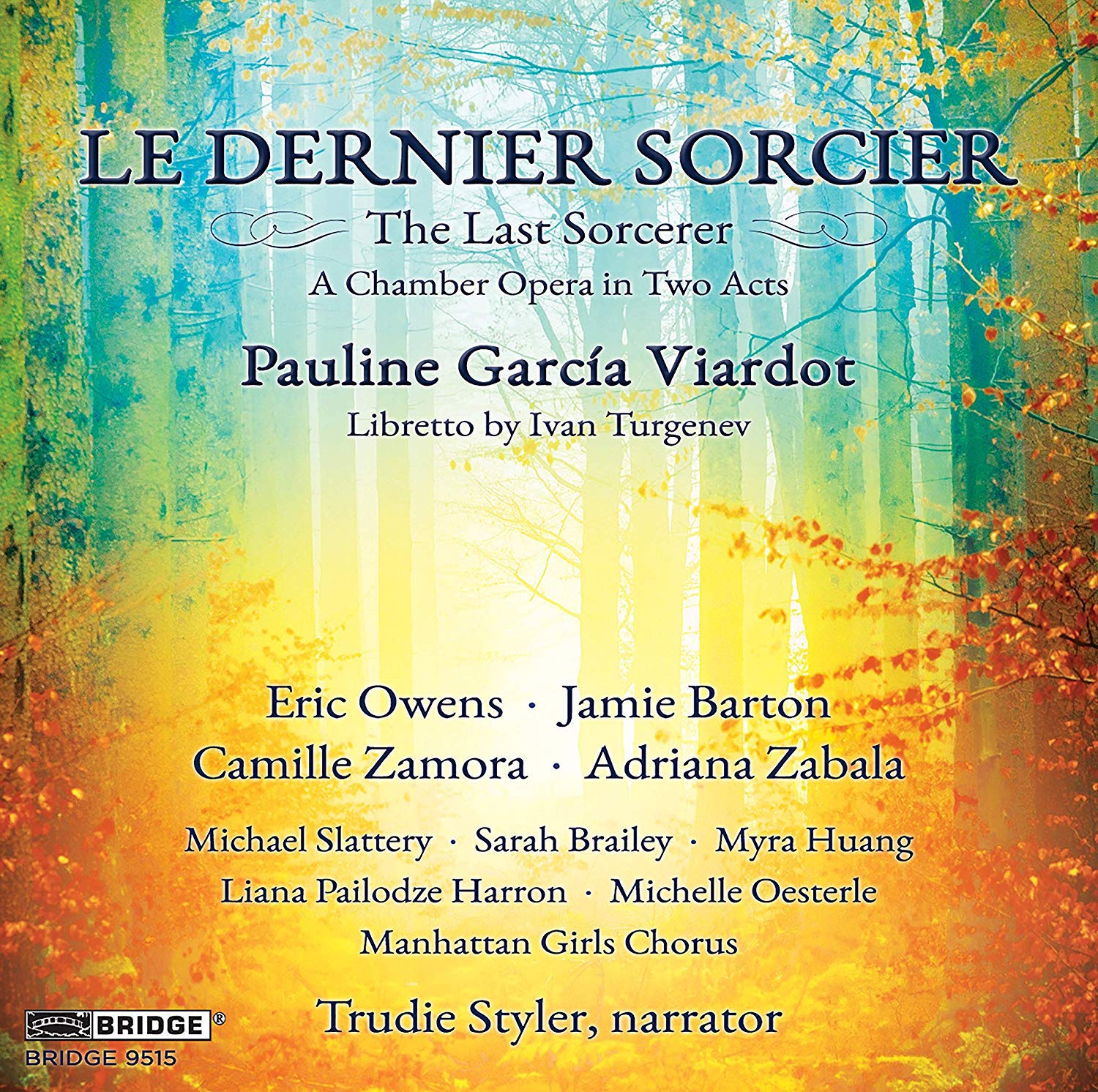 The CD recording presents the original version for piano, but the connecting texts have been translated into English. The British actress Trudie Styler recites these in a neat Oxbridge accent, but it is somewhat estranging to continuously switch between spoken English and sung French. Yet one quickly gets used to this, all the more so because the vocal lines are so florid and the musical accompaniment so compelling.

The short overture tells the story in a nutshell. Signal motifs and rumbling chords in the low registers symbolise the pompous Krakamiche and his servant Perlimpinpin, who keep grumbling about their lost powers. This stands in sharp contrast with the light-footed strings of notes in the high registers, that musically capture the frolicking elves and the young lovers.

In just over an hour Viardot leads us irresistibly through the fairytale-world of the troubled Krakamiche and his tormentors. Catchy piano flourishes accompany the elves who spin him around and throw water down his chimney. Their rhythmic laughter contrasts with his angry sputterings, performed with gusto by the bass Eric Owens.

In gracefully whirling lines his daughter Stella (the soprano Camille Zamorra) sings the praise of the raindrops that make her plants grow. The mezzo-soprano Adriana Zabala is a wonderfully infatuated Lelio and Jamie Barton is a majestic Fairy Queen. With her pure and agile soprano Sarah Brailey (Verveine) places all actions in a context, like a Greek choir.

Le dernier sorcier has a lot of momentum and abounds in pointed rhythms and sing-along melodies. The piano part has symphonic allure at times and is very varied. Myra Huang expertly brings out all its nuances. From playful appoggiaturas to low-pitched sounds of doom, from sensual sweetness to boisterous pounding rhythms. The Manhattan Girls Chorus flawlessly follows her each and every beat – without the help of a conductor. In the Finale they pay exalted homage to their beloved forest, accompanied by triumphant poundings of the piano that employ the entire range of the keyboard.

The CD booklet describes Le dernier sorcier as a ‘feminist eco-fable’ avant la lettre. After all, the women have outsmarted Krakamiche and from now on the forest can be the forest again: they have driven out the invaders, the former order has returned.

This notion seems a bit too far-fetched to me, but a parallel with our times can certainly be drawn. We are now threatened by the invisible powers of the Corona virus, that we try to drive out of our empire at all costs. – Whether we will be as successful as the elves, only time will tell.