Listening to the cd dedicated to the Australian composer Liza Lim (1966) that was recently released by Kairos, one can’t help but evaluate it in the context of the corona-pandemic that is currently keeping the world hostage. Are we headed towards utter downfall one wonders. The ominous title Extinction Events and Dawn Chorus originates in Lim’s concern about the huge amounts of plastic waste that are clotting the oceans. Its slow but inevitable disintegration into ever smaller particles threatens to kill the fish that eat them, and eventually life on earth itself.

This is but one of the many plagues we are facing: the devastating forest fires in Australia are still only barely under control; immense swarms of locusts eat away the crops in East Africa; large parts of the world will be flooded because of melting icebergs, while at the same time sweet water is becoming more and more scarce because of consecutive draughts.

In her programme note for Extincton Events and Dawn Chorus for 12 musicians Lim refers to the philosopher Timothy Morton. Our insatiable materialism and consumerism go at the expense of a habitable planet and we need to revalue our concept of nature. Morton coined the term ‘hyperobjects’ for phenomena that are so large we can only know them through their effects, such as climate change and mass extinction. We must reconsider ‘what is and what counts as knowledge’, writes Lim.

Her forty-minute long Extincton Events and Dawn Chorus has five movements, being one of her most substantial instrumental works to date. Lim presents an effective musical equivalent of the debris swirling around in our oceans. Its circulatory currents are translated into loops and rotating motifs, underpinned by the spooky sound of Waldteufels. This is an earthenware vessel covered with a skin pierced through with a stick; when the player turns it around the friction produces a groaning sound. 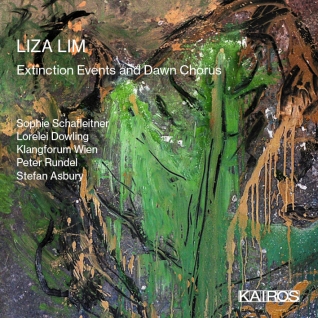 Glissandi, microtones, slaps, sudden plunges from high to low registers, breathy sounds and multiphonics abound. In the first movement ‘Anthropogenic Debris’ the recorded shrieks of the extinct Kauaua’i bird evoke an atmosphere of both nostalgia and doom. In contrast the fourth movement ‘Transmission’ is almost jolly. In a duet between violinist and percussionist, the latter tries to ‘imitate’ the musical material of the first on a rudimentary string drum.

In the concluding ‘Dawn Chorus’ Lim creates a mysterious world filled with sonorous whirrings of bullroarers to which the wind players place tentative, kazoo-like tones. The percussionists produce rattling and clicking sounds as if wooden sticks are falling. The trombone interjects short low tones, the other brass joining in with sustained chords that develop into a chorale of sorts. The piece ends with the unearthly sound of a contrabassoon extended with a long plastic tube. When the sound dives below the range of our hearing the music dies away into nothingness. Thus Lim audibly depicts the impending extinction of the coral reef fish who sing a ‘dawn chorus’ in the morning.

Lim composed Axis Mundi in close cooperation with bassoonist Alban Wesly of the German ensemble Musikfabrik. The title alludes both to Yggdrasil, the cosmic tree of Norse mythology that connects heaven and earth, and the ‘world tree’ in Siberian shamanism that acts as a ladder between lower, middle and upper worlds. The musical material indefatigably traverses all registers in a plethora of extended techniques, from Flatterzunge to multiphonics, glissandi and split tones. Lorelei Dowling of Klangforum Wien handles her virtuoso part with admirable precision and confidence.

Songs found in dream was inspired by Aboriginal culture, in which ‘songlines’ play an important role. Lim specifically draws on the concept of ‘shimmer’, an aesthetic-spiritual principle in which patterns of painted dots symbolize the power of ancestral spirits. This manifests itself musically in the many short motifs that form intricate patterns full of turbulence. Sustained sonorities are contrasted by high shrieks, while the use of Waldteufels, rainsticks, rattles and log drums recall Aboriginal percussion instruments. The piece ends quite abruptly, perhaps as a reminder that also Aboriginal traditions are on the verge of disappearing forever.

On this cd Liza Lim addresses important issues and her flair for creating unheard sounds is admirable.; the resulting soundworld is quite unsettling. Klangforum Wien and the conductors Peter Rundel and Stefan Asbury are its ideal interpreters.

I am a Dutch music journalist, specializing in contemporary music, and a champion of women composers. In 2014 I wrote the biography of Reinbert de Leeuw (3rd edition in 2020) and in 2018 I published 'Een os op het dak: moderne muziek na 1900 in vogelvlucht'.
View all posts by Thea Derks →
This entry was posted in music, news, women composers and tagged Extincton Events and Dawn Chorus, Klangforum Wien, Liza Lim, Peter Rundel, Songs found in dream, Stefan Asbury. Bookmark the permalink.