‘If I hadn’t had three things that have nothing to do with music, I would have gone to waste from loneliness and disillusionment at an early age’, wrote Ethel Smyth (1858-1944) when she was sixty. Those three things were: ‘A cast iron constitution, an outspoken fighting mentality and a modest but independent income.’

Whereas in the nineteenth century women were often doomed to compose chamber music, she preferred to write large-scale works. ‘I want women to turn their minds to big and difficult jobs; not just to go on hugging the shore, afraid to put out to sea.’

In 1903 her opera Der Wald was performed at the Metropolitan Opera. It would take 103 years (!) before the renowned house staged a second opera by a woman in 2016, L’amour de loin by Kaija Saariaho.  The British label Retrospect Opera now presents a CD with Fête Galante, Smyth’s fifth opera.

Smyth composed a total of six opera’s, of which The Wreckers (1906) and The Boatswain’s Mate (1914) are the best-known. These were previously (re)released by Retrospect Opera, and last November they issued a new recording of her ‘dance-dream’ Fête Galante (1923). No luxury, because although Smyth enjoyed a lot of prestige in her own time, she was largely forgotten after her death. – As I wrote before, I spent years trying in vain to convince conductors and concert programmers to perform or stage both above mentioned opera’s.

Nevertheless, in 1912 the famous German conductor Bruno Walter was convinced that her compositions would ‘reap much acclaim in the future. I consider Ethel Smyth to be a composer of great individuality and great importance. She knows how to express her stormy passion in exciting sounds and rhythms.’ In 1922 she was knighted, four years later she was awarded an honorary doctorate at Oxford. Around that time she became deaf, after which she concentrated on writing her – often hilarious – memoirs.

March of the Women

These reveal a character who did not allow herself to be distracted from her compositional path by anything or anyone. Neither did she hide her lesbian orientation, and she was an ardent suffragette into the bargain. After she threw a stone through the windows of the Ministry of the Interior, she ended up in prison for a month. With a toothbrush she conducted her fellow prisoners in her famous March of the Women. This grew into the hymn of the English women’s movement.

Ethel Smyth had her fighting spirit from no strangers: her father was an important general in the Royal Artillery. When as a 17-year-old she announced that she was going to study composition, he exclaimed that he ‘would rather see her dead and buried’. – There and then she decided to ‘make life at home into such hell that they just had to let me go.’

In 1877 she left for Leipzig, where she teamed up with such greats as Anton Rubinstein, Clara Schumann and Johannes Brahms. Because of her resolute demeanour and musical intensity Brahms jokingly called her ‘the oboe’. Her early works, such as the Mass in D (1891), were still influenced by him, but gradually she developed a personal style. This is rooted in romanticism and is permeated with splashes of Wagner, Debussy and English folklore.

For Fête Galante (1923) she sought inspiration in early music, in keeping with the neoclassicism of Ravel and Stravinsky. Edward Shanks’ libretto after a story by Maurice Baring draws on the tradition of the commedia del’arte. It is a play in a play, in which the love couple Pierrot and Columbina fall victim to a case of mistaken identity. The queen cheats on the king with a man wearing a Pierrot costume, but the real Pierrot refuses to betray his sovereign. – And is sentenced to the gallows.

In the 45 minutes of this one-act opera, Smyth takes us into a fête full of beautiful music. She opens with a true to type sarabande, a light-footed baroque dance. This is followed by an infectious polyphonic musette, in which Smyth demonstrates her flair for writing appealing melodies and harmonies. Initially the atmosphere is playful, with cheerful rhythms and motifs of folk instruments such as concertina, banjo and tambourine. Gradually an increasingly tragic undertone creeps in, with dark sounds of (bass) clarinet and horns and arias in subdued minor.

As the music progresses, Smyth cleverly manages to make the inevitable tragic outcome become more and more inescapable. A swaying, folksong-like tune runs through the opera as a leitmotif. Cunningly enticing when the king asks Pierrot to reveal the identity of his wife’s lover. Triumphant and sad at the same time when Pierrot decides to give his life for the queen. – He thereby also gives up his own love for Columbina, leaving her under the delusion of being deceived herself.

The performance by ensemble Lontano under the baton of Odaline de Martinez is excellent. Significant rests are allowed all the space they need, and the individual musicians shine in Smyth’s flamboyant solos. The baritone Felix Kemp is a sensible Pierrot, the baritone Simon Wallfish navigates beautifully between barish king and humiliated husband.

The mezzo-soprano Carolyn Dobbin is a delightful adulterous queen and the soprano Charmian Bedford is a touching Columbina. The other singers are also excellent, and the six soloists smoothly merge in the swirling choral passages. An absolute highlight is the madrigal ‘Soul’s joy, now I’m gone’ on a text by John Donne halfway through the opera.

In her own days, Smyth was promoted by renowned conductors such as Bruno Walter, Sir Thomas Beecham and Arthur Nikisch. In Odaline de Martinez she has found a worthy contemporary advocate. As an encore the cd offers a flawless performance of Liza Lehmann’s poem The Happy Prince (after Oscar Wilde). With a penetrating recitation by Felicity Lott and subtle piano accompaniment by Valerie Langfield. – Buy that CD! 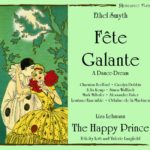 Available via this link :

Thea Derks is a Dutch music journalist, who studied musicology at Amsterdam University. She' specialized in contemporary music and always has an eye open for women composers. In 2014 she wrote the biography of Reinbert de Leeuw and in 2018 she published 'Een os op het dak: moderne muziek na 1900 in vogelvlucht'.
View all posts by theaderks →
This entry was posted in music, women composers and tagged Ensemble Lontano, Ethel Smyth, Fete Galante, Odeline de la Martinez, Retrospect Opera. Bookmark the permalink.