James MacMillan: ‘My Percussion Concerto No.2 is a musical and visual spectacle’ 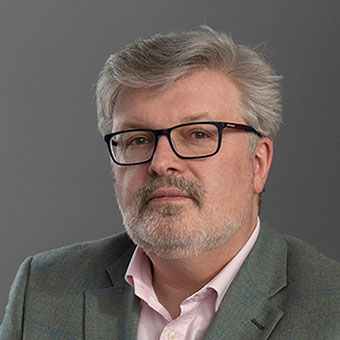 ‘When Colin Currie asked me to compose a new percussion concerto for him, I grabbed this chance immediately, for this idea had already been in my mind for a while. I was very curious to explore new grounds and intended to create a completely different piece from my first percussion concerto Veni, veni, Emmanuel.‘ Practicing what he preached, the Scottish composer James MacMillan (1959) finished his Percussion Concerto Nr.2 in 2014.

It was premiered that same year by Currie and the Dutch Radio Philharmonic Orchestra in AVROTROSVrijdagconcert and broadcast live on Radio 4. The concert drew mixed reviews, but has nevertheless nestled snugly in the canon of contemporary music. Since its inception it’s been performed some thirty times, not only by Currie, but also by other renowned percussionists, such as Claire Edwardes and Martin Grubinger.

From 17-20 January the young Dutch percussionist Dominique Vleeshouwers will be the soloist in a run of three concerts with the Netherlands Philharmonic Orchestra, of which the first again forms part of the AVROTROSVrijdagconcert Utrecht, while the other two will take place in the Amsterdam Concertgebouw. There, on Saturday 18 January, Vleeshouwers will receive the prestigious Dutch Music Prize 2019 from the hands of Ingrid van Engelshoven, Minister of Culture.

In his music James MacMillan strives for a direct communication with the public, often inspired by his Catholic faith. He made a name for himself with works such as The Confession of Isobel Gowdie, a Scottisch woman who was burnt at the stake for alleged witchcraft; The World’s Ransoming for alto oboe and orchestra, two large-scale Passions and his first percussion concerto, Veni, Veni Emmanuel. This monumental but lively and varied concerto marked his international breakthrough and has since been performed over three hundred times.

On the occasion of the premiere of his second percussion concerto in 2014 I interviewed MacMillan for Radio 4 after its first run-through in the radio studios in Hilversum.

In 1991 he collaborated closely with the Scottish percussionist Evelyn Glennie, and over a decade later he also sought Currie’s advice for his second percussion concerto. MacMillan: ‘I’ve known Colin since he was a teenager and we’ve performed my first percussion concerto together many times. I am impressed by the conviction and dedication with which he plays my music, and know his interpretation inside out. We’ve become friends and when he asked me for a new piece, I seized the opportunity with both hands.’

The Scot did not want to repeat himself however: ‘I was looking for new ways, not only in terms of theme and structure, but also in terms of instrumentation. Colin played a lot of percussion instruments for me that I did not yet know. For example, he showed me the recently developed aluphone, an instrument that consists of a long rod on which aluminium pods are mounted in the arrangement of piano keys.’

Aluphone as played in Percussion Concerto No.2

‘Its sound balances somewhere between glockenspiel and vibraphone and can be clangorous, bright and metallic but also sweet. It moreover has a deep resonance that can create a sort of halo, a sheen. I use that to dramatic effect.’

Unlike Veni, Veni Emmanuel that was inspired by Advent, Percussion Concerto No. 2 has no religious background: ‘It is a completely abstract piece, based on the sound of metal percussion instruments. Besides the soloist there are two orchestral percussionists and together they sometimes form a trio, for instance in the beginning. There all three of them play marimba, but in different octaves and with different material, thus creating a kind of meta-marimba.’

Remarkable too, is the use of a steel drum, which often conjures up associations with Surinamese music. ‘I deliberately avoided that’, says MacMillan. ‘The steel-drum has an unprecedented richness of timbres and can sound very sensitive. I am particularly interested in that last quality, because the core of my piece is lyrical. But it remains a percussion concerto, so I also play around a lot rhythmically and the soloist has to work really hard. He often changes instruments quickly, so the audience sees him running back and forth across the stage.’

‘It was exciting to write this piece, because I could explore so many new timbres. The virtuosic aspect is appealing to both player and audience, especially when he succeeds in almost superhuman feats.’ With a satisfied grin: ‘My Percussion Concerto No.2 is a true spectacle, not only musically, but also visually, giving it an extra dimension.’

Before the world premiere in 2014, I made a reportage for Radio 4, that has unfortunately been taken offline. However I saved my short talk with MacMillan and Currie, which is now available as a podcast.

Thea Derks is a Dutch music journalist, who studied musicology at Amsterdam University. She' specialized in contemporary music and always has an eye open for women composers. In 2014 she wrote the biography of Reinbert de Leeuw and in 2018 she published 'Een os op het dak: moderne muziek na 1900 in vogelvlucht'.
View all posts by theaderks →
This entry was posted in music, news and tagged Colin Currie, Dominique Vleeshouwers, Elim Chan, James MacMillan, Nederlands Philharmonisch Orkest. Bookmark the permalink.

2 Responses to James MacMillan: ‘My Percussion Concerto No.2 is a musical and visual spectacle’