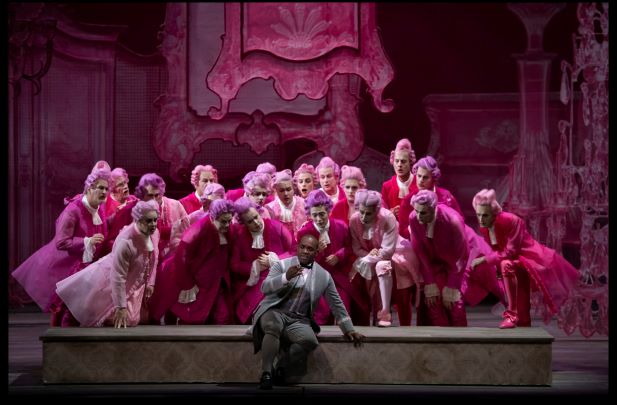 The first thing that catches the eye when entering the Dutch National Opera is the large number of young people who crowd into the cloakroom. The organisation has emphatically advertised its new production of La Cenerentola (Cinderella) as a ‘family performance’. A special information sheet provides insightful explanations of the voice types used and the story of Cinderella, as told in different cultures. The overwhelming cheering afterwards illustrates that Laurent Pelly has managed to strike the right chord with his witty and imaginative directing.

Unlike in Grimm’s fairy tales, Angelina/Cinderella in Rossini’s La Cenerentola does not suffer under a harsh stepmother, but under her surly stepfather Don Magnifico. He pampers daughters Tisbe and Clorinda from his second marriage, but squanders Angelina’s inheritance it and treats her like a doormat. Her two stepsisters constantly boss Angelina around and shower her with curses. Meanwhile, she dreams of a better life.

While she mops the floor in her apron, Angelina sings a folk song about a king who wants to get married. Three candidates compete for his crown, but he prefers ‘innocence and goodness’ to ‘pride and beauty’. Angelina tells and predicts her own story in a nutshell. No wonder her sisters are irritated and order her to stop singing.

But their disdain comes at a price, of course, as it goes in fairy tales. Before he chooses his wife, Prince Ramiro conducts some field research. Disguised as a beggar, his counsellor Alidoro knocks on Don Magnifico’s door. The sisters hone him away, but Angelina feeds him. Signalled by Alidoro, Ramiro changes roles with his chamberlain Dandini to take get a personal impression. As soon as he meets Angelina, the two immediately fall in love, and after a seemingly endless series of entanglements they get married.

In this opera Rossini commented on the enormous differences between rich and poor, a theme that is still topical today. But librettist Jacopo Feretti argues: whoever is born for a dime like Angelina can eventually become a quarter. Laurent Pelly has shaped this hopeful message with great humour. – Although he wisely leaves it open whether the happy end is real or imagined: at the end Angelina is alone again, mopping the floor in her filthy apron.

The daily life of Angelina and her family takes place in a 1950s setting, with rundown washing machines, frayed sofas and an old-fashioned TV. Prince Ramiro’s world is set in pink, in an 18th century atmosphere, right down to the costumes of his lackeys. Also in pink are the princely props, consisting of chandeliers, a royal banquet and lush ballroom that magically descend from the ceiling. – A striking depiction of Angelina’s dream world, even though the association girl-pink may be somewhat clichéd.

Laurent Pelly seamlessly interweaves parody with seriousness, which ties in nicely with Rossini’s own attitude towards ingrained opera conventions. His characters often sing head-on towards the audience, with grand gestures that mercilessly illustrate their vanity. Pelly accentuates the many accents in Rossini’s music with sudden head jerks, arm movements and rhythmically placed steps. Often to hilarious effect, especially in the ensembles and choral passages.

The cast is excellent. The mezzo-soprano Isabel Leonard is a captivating Cinderella. With her somewhat small but warm and agile voice, she seemingly effortlessly interprets Rossini’s neck-breaking coloraturas. As Ramiro, the tenor Lawrence Brownlee also tackles Rossini’s super-fast word sequences with apparent ease. With his imposing stature and ditto baritone, Nicola Alaimo is a wonderfully self-righteous Don Magnifico.

The baritone Alessio Arduini shines as the chamberlain who is allowed to play the role of prince for a while and the stepsisters are venomously portrayed by soprano Julietta Aleksanyan and mezzo-soprano Polly Leech. Both are studying at the National Opera Studio and know how to convince on slippers as well as on towering pumps under ridiculous hoop skirts. But the most impressive is the Italian bass Roberto Tagliavini, who glorifies with his deep, sonorous voice and great stage presence.

The Netherlands Chamber Orchestra and the men’s choir of Dutch National Opera, conducted by the 36-year-old Italian conductor Daniele Rustioni, bravely plod their way through Rossini’s incredibly difficult score. If truth be told, La Cenerentola is not a masterpiece: it contains a lot of interchangeable passagework and Rossini delivers coloraturas per linear metre. The rhythmic complexity sometimes leads to unevenness in orchestra and choir, and at times the soloists are out of sync. If Rustioni would not gesticulate so wildly, he might better master the musical complexities.

Though judging from the frenzied support, this was of no concern at all to the audience.

The above is a slightly adapted translation o my review of the opening night on 3 December, as published in Theaterkrant.

Thea Derks is a Dutch music journalist, who studied musicology at Amsterdam University. She' specialized in contemporary music and always has an eye open for women composers. In 2014 she wrote the biography of Reinbert de Leeuw and in 2018 she published 'Een os op het dak: moderne muziek na 1900 in vogelvlucht'.
View all posts by theaderks →
This entry was posted in music, review and tagged Dutch National Opera, La Cenerentola, Laurent Pelly, Roberto Tagliavini, Rossini. Bookmark the permalink.