Aspasia Nasopoulou: ‘If the doors for new music don’t open quickly enough, we have to knock harder!’ 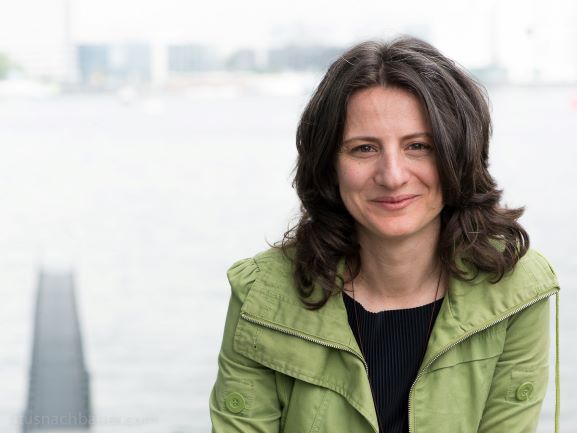 The Greek/Dutch composer Aspasia Nasopoulou (Athens, 1972) was appointed as the new artistic leader of orkest de ereprijs. Though she has lived in the Netherlands for a long time, she is not as well known to the general public as her compatriot Calliope Tsoupaki. But in new music circles she has made a name for herself as a composer of adventurous, interdisciplinary pieces.

Such as Lelia Doura in which she succeeded in translating the atmosphere of a troubadour song into a lively score for the Dutch recorder quintet Seldom Sene, released on cd in 2014. Another remarkable work is Nachtwerk in which Nasopoulou combines poems written and recited by Micha Hamel with music for the Doelen String Quartet. Reviewing these works in 2015 I wrote: ‘We’ll certainly hear more of Aspasia Nasopoulou.’

In 2016 she composed the ambitious Ten Dipoles, again for recorder quintet Seldom Sene. In ten sparkling miniatures Nasopoulou captures as many pairs of opposites (‘dipoles’) that in pre-Aristotelian theory form the basic principle of all elements. For instance, ‘good-bad’; ‘straight-bent’ and ‘left-right’.

Apart from using an impressive array of recorders – ranging from the highest baroque sopranino to the lowest possible modern sub-contrabass – she combines the instruments with ten free aerophones developed by Horst Rickels and Ernst Dullemond.

These aerophones not only add a pleasant visual aspect to a performance, but also provide extra sound possibilities. They mainly act like a chorus, their sounds being triggered by pedals operated by the musicians. At other times though, they perform as individual ‘players’, engaging in conversation or vying for attention with their live counterparts. Hilarious are the sudden twittering birds or mooing cow that interrupt their argument.

In  somewhat less than half an hour Ten Dipoles creates a fascinating world full of unusual and intriguing sounds. Particularly striking is the opposite ‘male-female’ (nr. 4). This has a harrowing effect because the recorders use three different tunings (A=415 Hertz, A=440 Hertz and A=466 Hertz). No wonder Seldom Sene placed this beguiling piece first on their recent cd Not a Single Road.

But Nasopoulou’s field of work expands beyond composition. From 2006-2009 she co-organized and moderated two series of workshops in Huize Gaudeamus, Bilthoven: ‘The Composer’ and ‘The Performer’. In 2016 she initiated ‘Composer’s treat’ in which composers are offered a working week at de Buitenplaats, Starnmeerdijk. This residency is concluded with a presentation open for the public.

This September she started the concert series Nieuwe Noten Amsterdam, together with clarinetist Fie Schouten. Taking on the artistic leadership of orkest de ereprijs thus seems a logical next step. I asked her about her relationship with this ensemble and about her plans for the future.

When and how did you first get to know orkest de ereprijs?

I met Wim Boerman and de ereprijs in 2007 when I was asked to join the committee of a composition competition for high school students. I admire the fervour and dedication with which they bring across the intentions of each new composition, and I very much like the potential of their sound.

I moreover appreciate their continuous curiosity, their engagement with the creation of new music, their support of different generations of composers of today, and their very active involvement in music education.

Internationally renowned is their yearly Young Composers’ Meeting, a competition for aspiring talents initiated in 1995. This gives a positive stimulance to the careers of the participants, creativity being stimulated by providing free space for budding composers. De ereprijs is an important motor in Dutch contemporary music life.

As artistic director you will tread in Wim Boermans’ footsteps. Will you take a different course?

Wim Boerman will be the artistic director and conductor until the end of 2020 and I’m happy that during this period he will be close to the process of planning the next steps of the orchestra. I admire his curiosity and originality, bringing music of today closer to the audience without pretention, with dedication and persistence.

There are already many ideas that we will develop in the coming months. I strive for continuity and hope to further explore the connections between different artistic disciplines and different cultures. Here I see possibilities for international exchanges, but I can’t as yet predict how these will actually take shape.

The particular line-up of the ensemble with its focus on wind instruments has over the past 40 years lead to a wealth of surprising and powerful compositions. We will continue the open dialogue within the orchestra, and composers of today will keep playing an active role. Also it’s my intention to maintain and tighten the bond with educational institutes. Music is very important for young people, for it has connecting capacities and can bridge ideas, identities and cultures.

Will the ‘Orchestra of the 21st Century’ stay on? This was a joint venture with Gelders Orkest that recently merged with Orkest van het Oosten into Phion.

The Orchestra of the 21st Century will definitely keep playing new exciting repertoire for extended instrumentations. Also we intend to expand the collaborations, for instance with the National Youth Orchestra and ArtEZ Conservatory.

What are the main challenges you expect to face?

As always it remains difficult to finance new music. If you can show that new music has a meaning for today probably new doors will open. If they don’t open quickly enough we’ll have to knock harder!

I am a Dutch music journalist, specializing in contemporary music, and a champion of women composers. In 2014 I wrote the biography of Reinbert de Leeuw (3rd edition in 2020) and in 2018 I published 'Een os op het dak: moderne muziek na 1900 in vogelvlucht'.
View all posts by theaderks →
This entry was posted in music, women composers and tagged Aspasia Nasopoulou, Fie Schouten, Micha Hamel, orkest de ereprijs, Seldom Sene, Wim Boerman. Bookmark the permalink.

1 Response to Aspasia Nasopoulou: ‘If the doors for new music don’t open quickly enough, we have to knock harder!’