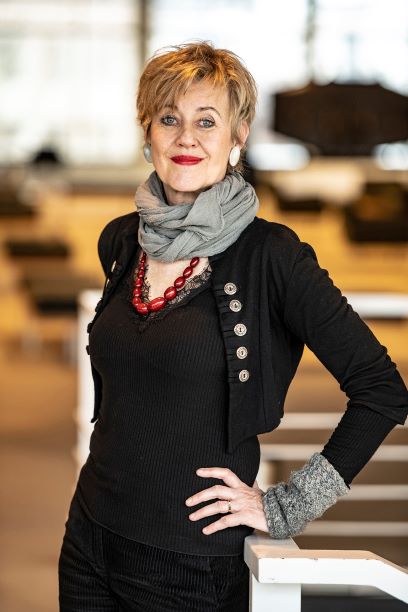 ‘There is an information war going on at the moment, which shows how important data are. The Assange case is the most poignant example of this,’ says the Dutch-German composer Iris Ter Schiphorst.

She addresses this theme in Assange: Fragmente einer Unzeit (‘Assange: Fragments from a Bad Time’) that will be premiered by Ensemble Modern in Muziekgebouw aan ‘t IJ on 7 November. The following day the piece will again be performed in the festival November Music.

Ter Schiphorst has a mission: ‘Although Wikileaks has never been caught on one single mistake, Assange is accused of espionage and treason, and is prosecuted as a criminal. In both England and America, politicians are trying to amend the laws on freedom of speech, so that unwelcome information can be regarded as subversive and dangerous to the state. This concerns us all.’

What characterises you as a composer?

‘I deal with subjects that make me angry, most of the time these are “extra-musical” at first sight. In my ensemble work Zerstören I (‘Destroying’) I react to the attack on the Twin Towers. This led to the emergence of a new form of irrationality, in which politicians revert to primitive violence. At the same time, various religions are establishing themselves as guardians of archaic norms and values. This is a fatal and frightening development, especially for women.’

‘In my documentary music theatre play Volk unter Verdacht (‘The people as suspects’) I discuss the methods of the State Security Service in the German Democratic Republic. – On a broader level there are scary parallells with the constant camera surveillance we are under nowadays.’

‘In Das Imaginäre nach Lacan I reflect on our ways of absorbing information. A singer recites excerpts from classical Arab poetry, now dressed in Arabic, then in Western attire. She often literally repeats her verses, only clad in a different outfit. Thus, I pose the question whether we are independent in our perception or whether we are guided by prejudice. In Meine kleine Lieder (‘My Little Songs’), I address the shift to alt-right in present-day Germany.’

‘Assange: Fragmente einer Unzeit is about the threat to our freedom as individuals. It’s about the attack on freedom of speech, freedom of the press, and on a deeper level about the danger that threatens us all when the law suddenly ceases to apply. The case of Julian Assange illustrates most poignantly what happens when someone proclaims “unpleasant” truths.’

‘Assange is an award-winning Australian journalist who acts as spokesman for the Wikileaks platform, which was founded in 2006. This website offers investigative journalists the opportunity to denounce abuses anonymously. Since then, the platform has revealed many things. Such as the abuses in Guantánamo Bay, how Western states wage war on the basis of fake news, how they create tax havens, manipulate elections and silence whistle-blowers.’

Artists must speak out

‘Unfortunately, many people seem to be only moderately interested in this, but it concerns us all. To speak with Edward Snowden: “When revealing a crime is treated as a crime, we are ruled by criminals.” Now journalists are being prosecuted and even murdered, the importance of transparency is greater than ever. We must speak out as artists, because nothing less than the future of investigative journalism and press freedom is at stake.’

How did you set up your composition?

‘I use short excerpts from speeches and statements made by politicians on the Assange case. I have edited these recordings and and programmed them for a sampler, which is operated by one of the pianists. At the same time I try to express in the music itself how much this situation worries me. For instance, the music often drowns out the solo soprano, even though she sings amplified. The whole affair makes me so upset because it is clear that this form of disenfranchisement can affect us all.’