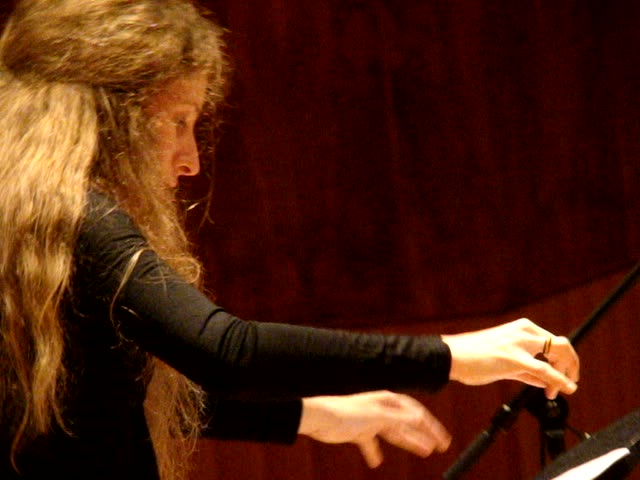 ‘With her surprising and communicative music, Anna Korsun rose high above her colleagues.’ I wrote this in 2014, when she won the Gaudeamus Award. I concluded: ‘We’re definitely going to hear more from her’, and since then the Ukrainian composer has more than fulfilled that promise.

She made a name for herself as a composer, pianist, vocalist, conductor and (co-)organiser of concert series. Her work is performed at all major modern music festivals and earlier this year she was awarded the Open Ear Prize of Stichting Trillende Lucht. In November Music Modelo62 presents a cross-section of her oeuvre, which counts over 50 compositions to date.

With its cross-genre programming, The Hague Ensemble is the ideal interpreter of Korsun’s music. The musicians previously advocated such idiosyncratic composers as Sedje Hémon and Petra Strahovnik. Anna Korsun, too, likes to think outside the box and makes connections with the visual arts, dance, theatre and literature. In her work she involves professional and amateur musicians as well as non-musicians. She moreover directs musical projects and teaches composition at the Amsterdam Conservatory.

Korsun has a great love for the human voice and weaves enchanting musical textures out of unheard sounds, permeated with expectant silences. With her poetic music, she manages to touch the unsuspecting layman’s heart. ‘Her work is an unadulterated and highly original combination of archaic and enchanting musical arrangements’, opined the jury of the Open Ear Prize. Born in 1986 in Donetsk, she studied composition and music theory at the Music Academy in Kiev, after which she moved to Munich. There she continued her studies with Moritz Eggert at the Academy for Music and Theatre.

A stroke of luck, as it turned out. ‘I didn’t know Moritz when I was admitted to his class, but it was a happy coincidence, he was and is very important to me. He gave me lots of useful advice and was always open to questions on any subject. Moritz has great analytical skills, is a particularly talented musician and has good intuition. I have enjoyed each and every lesson and all our conversations on composition.

Yet she wouldn’t go as far as claiming that thanks to Eggert she has found her own voice. ‘Finding an “own voice” is a complex process that is determined by many circumstances. First and foremost it is very important to know that someone supports you in your search. But frankly, I wouldn’t even say that I’ve formed my own voice. After all, that would mean that I’m stuck with a certain style, while I’d rather develop myself further. Anyway, you never know exactly when and by whom or what you’re influenced, that happens unconsciously.’

She certainly hasn’t become a musical epigone of Eggert. ‘Our musical directions are very different and that’s how it should be. It’s terrible when the student becomes a copy of his or her teacher. I don’t like to compare art anyway and honestly wouldn’t know how to do this. An artistic expression is always unique. And whether you like something or not is purely a matter of personal taste.’

The mere build-up of the concert on 5 November is in keeping with the adventurous spirit of Anna Korsun. Four of her pieces will be presented at two different locations. From seven o’clock to seven thirty Modelo62 plays in the Grote Kerk in Den Bosch. In this tightly designed, sunlit space, the first piece Pulsar for organ and soprano will be performed by Korsun herself.

With sustained, pulsating tones she creates a hypnotic sound web in which voice and organ merge seamlessly with each other. In the following Signals, fourteen musicians are equipped with a megaphone. A range of cries, screams, whistling, muffled fragments of text and stretched vocals surround the audience. It sounds like a chorus of ghostly aliens.

After this, the audience and musicians will move to the Willem Twee Toonzaal for the second part of the concert. The claustrophobic Tollers Zelle for guitar and vocals is inspired by the German poet and revolutionary Ernst Toller. He was one of the leaders of the communist Bavarian Soviet Republic, which was proclaimed immediately after WWII but only existed for a year; in 1919 Toller was imprisoned.

The guitar is tuned in scordatura and is moreover played with a wine glass. The thus formed glissandi find an echo in the voice, which has to sing ‘not classical’. In this way, Korsun creates an oppressive universe in which the boundaries between instrument and man are blurred once more. The portrait concert ends with Ucht for ensemble and tape, in which Korsun again treats our ears to unheard, mysterious sounds.

Anna Korsun’s music escapes analysis and cannot be pigeonholed. You simply have to undergo it, as an adventure of which you can’t foresee the outcome. But anyone who dares to immerse themselves in Korsun’s private universe will be richly rewarded.

Thea Derks is a Dutch music journalist, who studied musicology at Amsterdam University. She' specialized in contemporary music and always has an eye open for women composers. In 2014 she wrote the biography of Reinbert de Leeuw and in 2018 she published 'Een os op het dak: moderne muziek na 1900 in vogelvlucht'.
View all posts by theaderks →
This entry was posted in music, news, women composers and tagged Anna Korsun, Modelo62, November Music, Sedje Hémon. Bookmark the permalink.