For a moment the envelope doesn’t seem to open, but then Ingrid van Engelshoven conjures up the redeeming piece of paper. ‘The winner of the Gaudeamus Award 2019 is Kelley Sheehan!’ The small American composer is visibly surprised, she hasn’t seen this coming. Probably not entirely coincidentally, the organisation for new music has positioned her right in the middle of her four fellow candidates. – She herself would have divided the prize equally among them, she tells me afterwards.

Sheehan’s surprised reaction is heartwarming, as is the presence of the Dutch Minister of Cultural Affairs. It is a message to up-and-coming composers and other artists: you matter! Thus the award ceremony on 8 September was a nice icing on the cake of a varied festival. A range of cross-border productions spread across the city of Utrecht. – From festival centre TivoliVredenburg to Kunstruimte Kuub and from Theater Kikker to Centraal Museum and Nicolaïkerk. There were also free outdoor performances on the Neude and Weerdsluis.

The fact that young composers no longer exclusively focus on black and white dots on paper is a given. Collaborations with other disciplines such as dance, visual arts and technology are a matter of course. What did strike me in this year’s festival however, was the desire for collectivity on the part of the five nominees, their bent towards joint creation. – A reassuring feeling in times of polarisation and excessive individualism.

The most pronounced in this are the American Scott Rubin and the Canadian Remy Siu. Rubin creates his pieces together with dancers equipped with movement sensors, in direct interaction with the performing musicians. Siu develops music projects with his own Hong Kong Collective, for which he writes software inspired by video games.

In our pre-concert talk Siu even challenged the fundamental concept of a composer. The Canadian Stefan Maier, the British composer Nicholas Morrish and prizewinner Sheehan also regard the performer as a kind of composer.

Jurors Clara Ianotta, Yannis Kyriakides and Gerhard Stäbler describe Sheehan as ‘a true explorer of sound’. She ‘works with objects that are stretched in their function’ and creates ‘an unusual noise world’. This certainly applies to Four Sharp Corners for string quartet, performed on Thursday by the Utrecht based ensemble Insomnio. Four string instruments ensnared by fishing wires lie on as many tables. While the musicians try to free their instruments, screaming electronic sounds emerge. With their bows the four string players elicit crunching sounds from their music stands. Two players compete for who can raise or lower his stand with the loudest bang. Whoever said modern music is dry and cerebral?

The Traces that Remain by Nicholas Morrish also has a fresh, humorous slant. Conductor Ulrich Pöhl dribbles back and forth between three old-fashioned gramophones that are prominently placed on stage. He winds up the mechanism and places shellac discs made by Morrish himself. These contain the ticks and splutters inherent in their manufacturing process. The drummer grates a metal comb over the needles of a cactus. According to Morrish, cactus needles were once used to pick up the sound of the records. The ensemble plays fragments of the romantic music we expect to hear from these analogue discs.

The performance Nocturne in EUropean Waters by the Spanish-Dutch composer Jonás Bisquert is downright poignant. Musicians from the New European Ensemble and singers of Consorte are positioned on either side of the Weerdsluis. Gracefully undulating melodies travel from musicians to singers and from quay to quay. Poet Randa Awad recites her poem The Long European Nights, standing on the parapet in the middle of the lock, partly in Arabic, partly in English. Four singers join her, but she abruptly pushes them into the water: ‘Now dead, you oscillate!’ It is a crushing image of the refugees we leave to their fate in the Mediterranean Sea.

The festival opened on Wednesday, September 4 with the world premiere of W.A.L.L. by Aart Strootman, performed by Slagwerk Den Haag and Temko. Strootman thus fulfilled the composition assignment associated with the Gaudeamus Award, which he won in 2017. He personally built a wall-filling 60-tone marimba, which had been announced with a great deal of fuss. We were even offered a preview of a documentary about its creation. Unfortunately this was rather uninformative. We see Strootman frantically sawing, sanding and fretting, but must learn from the programme booklet that he has divided the octave into 60 instead of 12 tones. 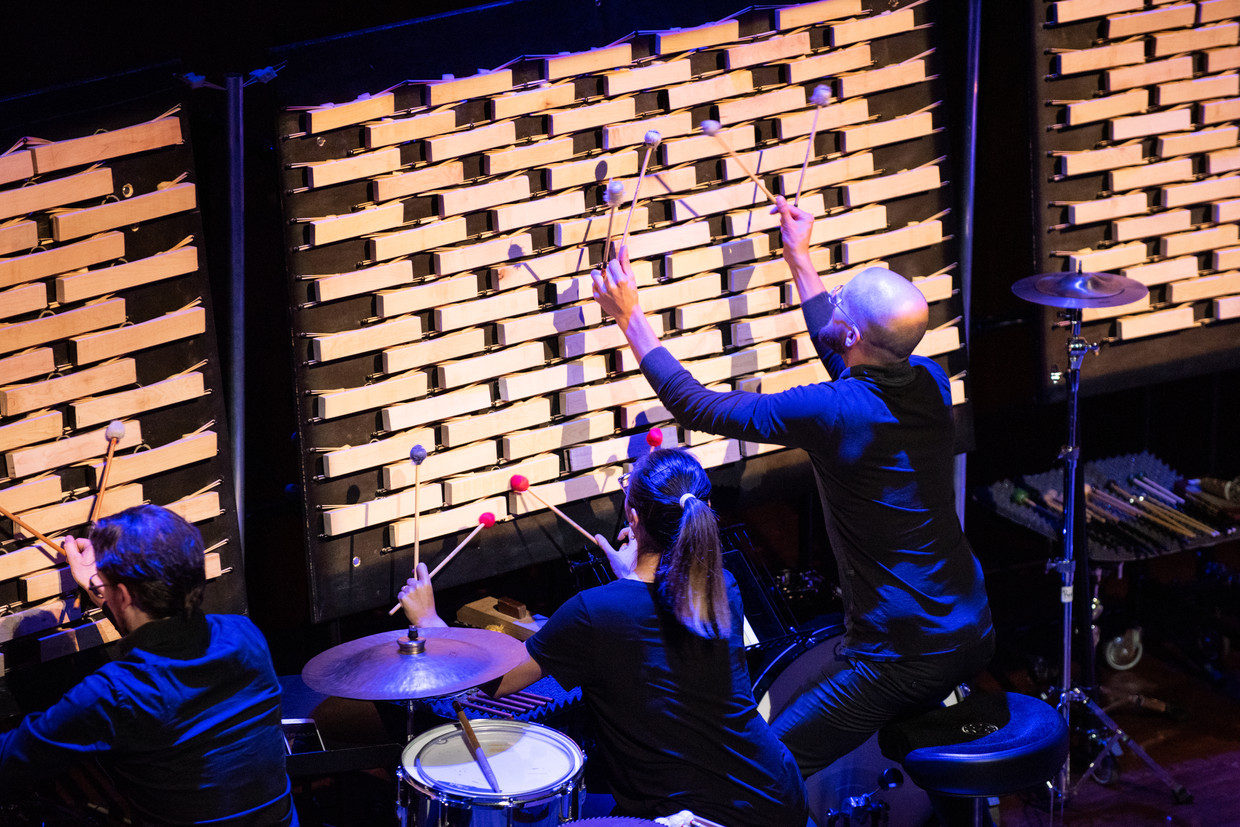 The promised ‘wall of sound’ also failed to materialise. W.A.L.L. is rather more a study in softly echoing, microtonal guitar arpeggios, sparsely larded with lovely patterns played on the marimba wall. The percussionists – veering upwards from their stools to ‘climb’ the wall – create some beautiful, buzzing passages, but on the whole the wall is subservient to the guitars and the other percussion instruments. Only rarely the percussionists are allowed to indulge themselves in noisy thunderclaps on metal tubes placed between the marimba wall. All in all, the musical material failed to hold our attention over the duration of an hour.

More interesting was Bird, the new piece that Sebastian Hilli, winner of the 2018 Gaudeamus Award, composed for Asko|Schönberg. It is a cheerful amalgam of loud staccato blasts from the ensemble, intersected with sudden silences. Hilli creates a lively question-and-answer game that bounces from jazzy percussion and big-band brass to cheery marching band sounds and exhilarating poppy dance music. The percussionist plays a brilliant solo on bass drum and hi-hat, the pianist pounds out roaring chords on her grand piano.

A star role is reserved for the solo trumpeter, Bird turning out to be a sort of trumpet concert in disguise. Trumpeter Bas Duister has an unprecedentedly beautiful tone full of colour shades, and effortlessly produces the highest notes in virtuoso melodies. The work ends with a parody of the endlessly repeated chords with which classical composers like Beethoven conclude their pieces. Every time you think it’s over, a squeaking piccolo screams for attention. A wonderful piece that sends you home with a cheerful feeling. Gaudeamus could not have wished for a better finale to its 69th edition.