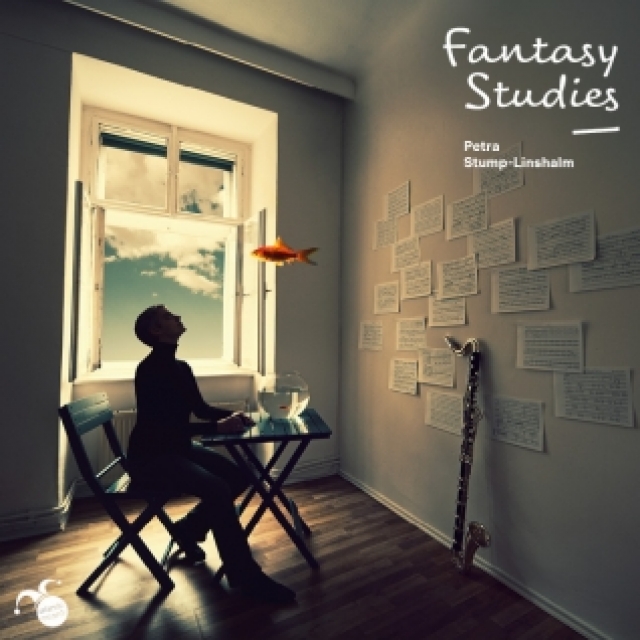 The bass clarinet is no longer the odd one out as a solo instrument. The Dutch pioneer Harry Sparnaay convinced many a composer of its versatility, immense variation of colours and expression. The merits of the contrabass clarinet, however, are a completely different matter. On her cd Fantasy Studies the Austrian clarinettist and composer Petra Stump-Linshalm puts it in the limelight in her cycle Uisge Beatha – A Guide to Flavours.

From the first prototype developed at the beginning of the 19th century the contrabass clarinet didn’t find its final form until the turn of the 20th century. In 1909 Schoenberg put its dark, resonant sound to good use in his Five Orchestral Pieces, discarding the contrabass clarinet however in the revised version he made forty years later. Messiaen used the instrument in his opera St. François and his orchestral piece Eclairs sur l’Au-Delà, Varèse employed it in his ground breaking Amériques.

Thus the contrabass clarinet was mainly used to add extra colour and poignancy to the overall texture. The only famous solo performer is the jazz musician Anthony Braxton, and contemporary composers such as Franco Donatoni, Gérard Grisey and Gerard Brophy wrote solo works for it. Stump-Linshalm seems to challenge both composers and performers worldwide by opening her cd with a cycle of eight studies entirely dedicated to the contrabass clarinet, performed by her husband Heinz-Peter Linshalm.

Uisge Beatha is the Irish word for whiskey, meaning ‘water of life’. In the cd-booklet Stump-Linshalm explains that in her piece ‘different whiskey aromas are described in sounds, and the taste experience of liquid gold is transformed into a listening experience. I recommend enjoying an appropriately selected whiskey with each movement!’ –  Since eight glasses of alcohol might somewhat hamper an impartial opinion, I decided to listen to the music with a clear head.

Stump-Linshalm takes her time and only gradually unveils the possibilities of the contrabass clarinet. In the first movements of Uisge Beatha we hear long held notes, soft murmurings and breathy pulsating sounds in the lowest registers, creating a meditative atmosphere. The music becomes more lively when small flourishes and burgeoning melodies are interspersed with the odd shriek in the highest registers. Almost unnoticed Stump-Linshalm moves forward into bolder territory, rattling the keys and firing loud slaps that sound like gunshots.

In Peat Monster, the final and longest movement, darkly grumbling sounds and hoarse whisperings vie with tormented outcries, ominous harmonics, percussive hootings and hesitant melodies that are roughly broken off before coming to bloom. The music becomes more and more lively and varied, and the textures grow so complex we seem to be hearing at least two instruments at once. Is Linshalm using circular breathing here, is he playing along with a pre-recorded tape?

The cd also features music for other instruments, ending with the cycle Fantasy Studies after which it is named. This is scored for flute (piccolo and alto flute), clarinet (E-flat and bass clarinet), soprano saxophone and spring drum, recorder (soprano, tenor, bass recorder), triangle, and violoncello. In seven movements the studies become ever more rhythmical, with elaborate lines developing into intricate, virtuoso patterns, though the music never loses its transparency.

All the works are excellently performed. It is the cycle for contrabass clarinet however that lingers longest in one’s mind. Stump-Linshalm proves to be a strong and convincing advocate of this somewhat disregarded instrument. Surely this cd will help other clarinettists to discover its many qualities. The cd appeared on Orlando Records.

Thea Derks is a Dutch music journalist, who studied musicology at Amsterdam University. She' specialized in contemporary music and always has an eye open for women composers. In 2014 she wrote the biography of Reinbert de Leeuw (3rd, updated print 2020) and in 2018 she published 'Een os op het dak: moderne muziek na 1900 in vogelvlucht'.
View all posts by theaderks →
This entry was posted in music, review, women composers and tagged Fantasy Studies, Petra Stump-Linshalm, Uisge Beatha. Bookmark the permalink.