Gavin Bryars: ‘I look upon Billy the Kid with some compassion’ 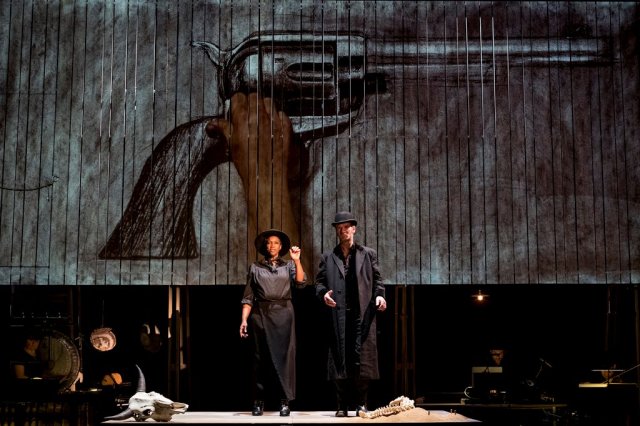 In Calamity/Billy the French Théâtre de la Croix-Rousse & the Belgian Muziektheater Transparant combine two mythical heroes of the Wild West. Starting point of this double bill was Ben Johnston’s song cycle Calamity Jane to her Daughter, to which Gavin Bryars composed a companion piece, The Collected Works of Billy the Kid. The production was premiered in March in Lyon, then toured through Switzerland and Belgium; it will be performed at Operadagen Rotterdam on May 25th. I visited the Belgian premiere in Concertgebouw Bruges on 28 April.

The semi-dark stage exudes the atmosphere of a Western Saloon. The soprano Claron McFadden superbly sings the sometimes stark vocal lines Johnston based upon the letters Calamity Jane allegedly wrote to her daughter. With much bravura she brings across the passages in which Jane boasts about her exploits as a gunwoman, switching to a tone of subdued sorrow when she bewails her daughter’s absence. The just intonation of keyboard, organ, violin and percussion makes for a quirky and somewhat archaic sound world that wonderfully suits the subject matter.

In Bryars’ The Collected Works of Billy the Kid McFadden sings all the female roles, clad now in sturdy trousers, then in a matronly apron, depending on who she is impersonating. The French blues star Bertrand Belin is her partner Billy the Kid. He sings with a gritty voice, clutching an inseparable microphone in his left hand. The musicians of Les Percussions Claviers de Lyon at times join in the action. A highpoint is the wild dance violinist Lyonel Schmit performs centre stage, meanwhile playing a fiddle tune at breakneck speed. Hereafter the atmosphere becomes more grim, and when Billy the Kid is finally killed the music assumes a wistful, elegiac tone.

The audience warmly applauds the performers. Bryars himself is not present in Bruges, but we speak on the telephone a week after the concert.

Did you know Johnston’s ‘Calamity Jane to her Daughter’ when you were asked to write a companion piece?

Yes I did, I even have a copy of the letters Calamity Jane wrote to her daughter. Another coincidence is that Ben Johnson and I have been friends for ages. I met him in Illinois in 1968 when I was working on a few dance projects at the university. He was one of the teachers there. I like his song cycle very much, especially so within the range of his work.

Ben has worked with microtonality from the early fifties onward, when he was studying with Harry Partch. He wrote a beautiful string quartet, but can also relate to more popular music. Like in the jazz based Ci-Git Satie, a sort of homage to Satie which he wrote for the Swingle Sisters. In Calamity Jane he also successfully integrates his microtonality into a more popular idiom. Take the piano: because of its just tuning it sounds very much like a bar room honky-tonk piano.

You based your opera on ‘The Collected works of Billy the Kid’ by Michael Ondaatje. What attracts you in this book?

Michael is a very intelligent writer, who wrote a standard book about the jazz scene in New Orleans, Coming Through Slaughter. We happen to be friends as well, and whenever I play in Toronto he comes to hear my concerts. I love his unconventional approach to literature, as in The Collected works of Billy the Kid.

It is not a straightforward novel – though some parts of it are – but rather a combination of narrative, research and poetry. Poetry written by Michael himself, but in the guise of Billy the Kid. His book is based on the story of Billy’s life and the imagined poetry from Billy himself, but it also incorporates newspaper clippings. It is very intricate, yet very cleverly done, in an original way. Jean Lacornerie, director of Théâtre de la Croix-Rousse made the libretto from the book.

In the programme book I read that Ondaatje’s language ‘screams’ to be set to music.

(Laughing out loud.) Well, it was definitely not screaming at me! It’s an interesting thought though, but screaming, no. I’d rather say the opposite: I know lots of texts that scream not to be set to music. But to be serious. This is my fifth opera, and the search for the right text often takes even longer than writing the notes themselves.

I spend a lot of time thinking about the text, reading it through and through, then I go ahead and write my score very quickly. It’s like a Zen calligrapher, who contemplates for hours on end, then sits down and writes what he has to write. I am not the type to make endless revisions, I have a strategy for the whole thing in my mind. As for Billy the Kid: I had already figured out the peaks and troughs, and knew where my music is going.

You did not use quite the same instrumentation as Ben Johnston’s. Was this your own choice?

Yes, I first worked with Gérard Lecointe in 1984, on my opera Medea at the Opera of Lyon. I threw out the entire violin section, replacing them by tuned percussion. Actually that is when Les Percussions Clavier de Lyon was founded by Gérard, so their base was a dramatic work. I have written a lot of music for their ensemble.

In Calamity Jane there’s one singer, piano/organ, violin and drums. The five members of Les Percussions Clavier de Lyon sometimes include the piano, so it was easy to fit that in. And the violin gave me even more possibilities melodically. So you have the one voice in the first part, Calamity Jane, and then in the second part, Billy the Kid, there are two voices, a male and a female one. Since the instrumentation is comparable, it feels like one big family. – Though I don’t use microtonality.

Was it your idea to compose for a blues singer and a lyrical soprano, Bertrand Belin and Claron McFadden?

We came up with that idea along the way. We decided to have a soprano who can sing both in a classical, and in a freer, nonclassical way. Jean suggested Claron McFadden, who is a remarkable singer. We worked on a preliminary sketch together, a piece of some ten minutes to make people interested in our project Billy the Kid.

You mean the fragment about Billy never using his left hand, only for shooting?

Indeed. I worked on this directly with Claron, she is extraordinary. She can sing impossibly difficult modern music, but also early music, with a very pure voice. Then again she can also sing like Sarah Vaughan, and moreover she is a great actress. So I wrote the part with her in mind. I knew what I could do, since I had been able to get acquainted with her voice in the flesh.

In December 2017 we rehearsed the first 7 out of 11 scenes in Lyon, where I got to work with Bertrand Belin as well. I had been to a concert of him and his rock band in the summer and we’d had drinks afterwards. He is a very intelligent, very funny, and very intuitive performer.

There was only one problem: he doesn’t read music. So he had to learn everything by heart, repeating his part over and over again, working with tapes, teachers and with Claron. Up to that rehearsal period I had only written solo parts for them, but in December I wrote a first duet. Their voices beautifully mingle together, so I wrote another duet. Turns out they enjoy them so much they have asked me to write a new piece for them.

What do you appreciate in Belin’s voice?

He is totally accurate, and has a quality in his voice that reminds me somewhat of Frank Sinatra. Because he doesn’t have to refer to the score he has his own phrasing, and he can’t go wrong. I love his timing, he’s completely internalized it in his physique. He also knows how to move on a stage, and understands what he is singing.

It struck me that he uses a handheld microphone, whereas McFadden is wearing a headset. Is this a direction in your score?

No, it is just a stage direction. However I do think he’s more comfortable with a handheld, because he’s used to singing rock music. And perhaps he also had an ear microphone, I’m not sure about that. The handheld microphone becomes a theatrical device as well. He always carries it with him, as if it were his pistol. At the very end, when he’s dead, Claron gently lays the microphone beside his body.

Well, that may seem strange, but people often do think of the Wild West as a strangely ideal environment. I myself love Westerns such as High Noon and Rio Bravo, I think they are real masterpieces. They have a strong moral sense about them. There’s a powerful awareness of right and wrong, like in a morality play.

But your music is not at all violent.

Indeed, my portrait is partly affectionate, I look on Billy the Kid with some compassion. My score has a feeling of melancholy, the violence is rather more in the background. The violin has a continuous kind of counterpoint to all the other voices and the general, rather more meditative atmosphere.

The violin gives me the opportunity to create melodies that are not possible on the mallet instruments. There’s also this moment when the violin comes on stage, when in the libretto it says ‘Billy the Kid starts dancing’. This is based on one of the poems in the book. Claron sings:

The violinist jumps on stage and plays a frenzied solo, savagely turning about and stomping his feet. Quite a challenge for the performer, for he must not only act but also play his virtuoso pyrotechnics from memory. The music I wrote for this scene is entirely my own, but relates to fiddle tunes from the Wild West.

This wild solo breaks up the action and creates new energy. It’s a pivotal scene in the opera. Hereafter Billy the Kid is taken prisoner and, after his escape, finally killed by Pat Garret. Then the sadness sets in, the ‘Paradise Lost’ so to speak.