George Benjamin on his opera Written on Skin: ‘We emphasize the unnatural’ 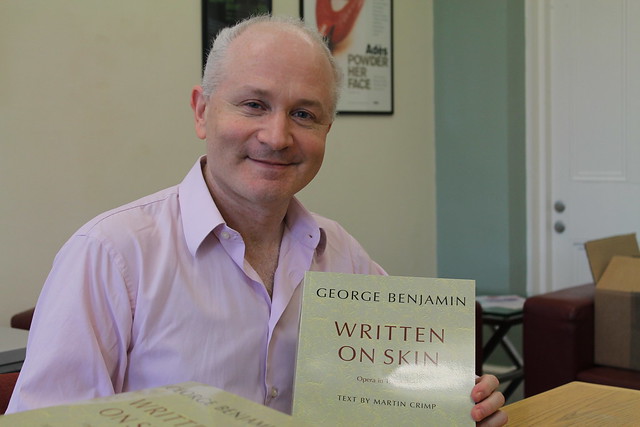 George Benjamin (1960) is composer in focus of the coming Holland Festival. Apart from the Dutch premiere of his recent opera ‘Lessons in Love & Violence’ there’s a semi-staged performance of ‘Written on Skin’. Benjamin composed this highly successful opera in 2012 for the Festival of Aix-en-Provence, where it was premiered by the Mahler Chamber Orchestra. This orchestra will now perform it in Muziekgebouw aan ‘t IJ Amsterdam with a new vocal cast.

In 2012 I interviewed Benjamin on the occasion of the Dutch premiere for Muziekvan.nu, a new-music website that was discontinued in 2015. Here is a translation of my article, originally published on 27 September 2012.

In July 2012, the world premiere of George Benjamin’s opera Written on Skin was the highlight of the Festival in Aix-en-Provence. It is a medieval story about a cruel landowner who hires a young illustrator to record his heroic deeds. When the boy starts an affair with his wife Agnes, he kills him and forces her to eat his heart. Hereafter she commits suicide. Benjamin and librettist Martin Crimp present the characters as a kind of archaeologists, who summon up the old story and simultaneously bring it to life.

When I meet George Benjamin on Wednesday 26 September, he has just been rehearsing with the Nederlands Kamerorkest (Dutch Chamber Orchestra) for four hours. Excited, he says: ‘It was the first Sitzprobe, in which singers and musicians go through their parts together without acting. It was fantastic, the orchestra plays exceptionally well.’

The premiere in Aix-en-Provence was performed by the Mahler Chamber Orchestra, but the singer are largely the same in the production of Dutch National Opera. Benjamin wrote his parts with these specific performers in mind.

You started working with the singers in 2008. Why so early?

Benjamin: ‘I didn’t want to compose for an abstract, idealized type of voice, but for people of flesh and blood. At the request of Bernard Foccroule, director of the Festival in Aix, we chose a medieval saga from the Languedoc, the region to which the city belongs. In order to fit the characters in with my own composition methods, I went in search of singers even before I had put one note to paper.

Once I’d found them, I invited them to my home, where I made an inventory of their possibilities. Apart from things such as colour, strength, agility and vocal range, I also noted what they like or don’t like to sing. It was very special that all five of them accepted straightaway, because I didn’t disclose anything of the libretto. – While composing I like to keep the horizon close to myself.

The role of the illustrator is sung by the countertenor Bejun Mehta. Why he?

I imagined it would be great to compose a love scene in which a high female voice and a high male voice encircle each other. There is a splendid example in Monteverdi’s Poppea; I find this much more attractive than a combination of a soprano with the usual tenor or baritone. Moreover, Bejun has a beautiful timbre and is a great and intelligent artist. He’s ideal for this role: a seductive, dangerous artist who enters the kingdom and makes trouble is a perfect fit for a countertenor, precisely because it is unusual to hear a man sing so high.’

You wrote the leading role for the soprano Barbara Hannigan, who cannot sing it in Amsterdam. What does that mean for you?

At first I thought it was terribly unfortunate. Barbara is the ultimate star and her interpretation of Agnes in Aix was remarkable. She sings the fiercest passages in complete fearlessness, but can also be intensely lyrical and remain very precise all along. Her interpretation was mesmerizing and enchanting, but she’d been booked for the role of Lulu in Brussels years ago. I regret she cannot be here now, but I’d like to stress I am very happy with the Swedish soprano Elin Rombo. Although she impersonates Agnes very differently I didn’t need to change one note in my score.

Did you give the different characters their own kind of music, use leitmotifs perhaps?

Certainly no leitmotifs, for I hate those: it’s as if the characters continually present their business cards, as Debussy once joked. However, I do associate the characters with certain instruments. For example, I use bassoons and horns for the ruler. In the beginning, when he still radiates a certain nobility and warmth, I accompany his vocal lines with celli.

I try to evoke the splendid colours of the boy’s illustrations with unusual instruments, such as mandolins, glass harmonica and viola da gamba. At times also by combining stopped trumpets playing in a low register with low overtones from the harp. But it is never obvious, it works on an unconscious level. At least that’s what I hope, as a composer I don’t intend to give any clues as to what you should hear and feel at which moment.

Whence the title ‘Written on Skin’?

First of all, the boy draws on parchment, which is made from animal skin. Martin and I requested to view a thirteenth-century document in The British Library. It was moving to touch this: it felt fresh and a little chilly, as if it had been made yesterday. Yet it was eight hundred years old! Furthermore, thanks to the boy, the woman becomes more self-confident and starts rebelling against her husband’s authority. After he has forced her to eat the heart of her loved one, she triumphantly tells him he can never undo what the boy has written on her skin. A metaphor, of course, but with an erotic undertone.

The characters not only act their role, but also comment on it. Does this not create a distance?

I love how the singers at the same time say their lustful lyrics and comment on them – “says Agnes” – “says the boy”. I find the mixture of warm eroticism and cool artificiality much more interesting than conventional language. Precisely by acknowledging that what happens on stage is artificial, the audience can be absorbed by it all the more spontaneously.

Through his approach Martin lifts the story a few centimetres above the ground. And exactly in that space comes my music. Without this my music would be superfluous.’

Part of our interview can be heard on Soundcloud

I am a Dutch music journalist, specializing in contemporary music, and a champion of women composers. In 2014 I wrote the biography of Reinbert de Leeuw (3rd edition in 2020) and in 2018 I published 'Een os op het dak: moderne muziek na 1900 in vogelvlucht'.
View all posts by Thea Derks →
This entry was posted in background, music and tagged Barbara Hannigan, Bejun Mehta, Dutch National Opera, George Benjamin, Holland Festival, Lessons in Love & Violence, Martin Crimb, Written on Skin. Bookmark the permalink.

2 Responses to George Benjamin on his opera Written on Skin: ‘We emphasize the unnatural’