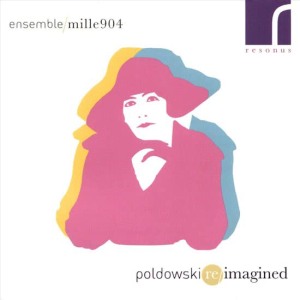 Poldowski re-imagined is the name of the latest CD of the French Ensemble 1904. Poldowski who?? Like many of her female colleagues, this Polish-British composer (1879-1932) is as good as forgotten; also her name is problematic. Born as the youngest daughter of violinist and composer Henryk Wieniawski, she was baptized Irène Régine Wieniawski. Yet she published her first compositions as Irène Wieniawska. After her marriage to Sir Aubrey Dean Paul in 1901 she called herself Lady Dean Paul and several variations hereof, before finally deciding on the short but powerful Poldowski.

Although she inherited her father’s talent, Poldowski never knew him: Henryk Wieniawski died on a tour of Russia when she was 10 months old. She stayed behind in Brussels with her British mother. Her father had been a professor at the conservatoire in the Belgian capital. According to some, Poldowski studied piano and composition there, but this is not supported by archive material.

Poldowski started composing early on and published her first mélodies (songs) in 1890, with a Belgian publisher. About six years later she moved to London, where she quickly made a name for herself as a pianist and composer. Although she married an Englishman and assumed British nationality, she continued to use French texts. She had a great predilection for the poetry of Paul Verlaine, who at the time was also popular with fellow-composers.

On its new CD the French Ensemble 1904 presents all her 22 Verlaine settings. Not in their original version but in arrangements for piano, violin and double bass. These were made by pianist and artistic leader David Jackson in tribute to Poldowski. She often made arrangements of her songs for chamber ensemble, but these were all lost. Jackson took inspiration from her Sonata for violin and piano, but also gave free rein to his own imagination. Hence the ‘re-imagined’ from the title.

What immediately strikes the ear is Poldowski’s flair for text setting. The parlando style of singing – with only one note per syllable – makes the words easily understandable. Her music sounds very French and is reminiscent of the mélodies of Debussy and Ravel. The declamation is almost casual, yet subtle twists and turns make the emotions acutely palpable. At times, as in Impression fausse, we hear tormented outcries that betray her partly Slavic origins.

The atmosphere is mostly melancholy, but sometimes also inflammatory. As in the mischievous Cortège about a circus lady whose slave peeps under her skirts. That Poldowski herself was an outstanding pianist is evident from the varied and colourful piano part. Often she weaves impressionist splashing waterfalls through the vocal part, at other moments supporting the argument with hammered chords. The lines of violin and double bass added by Jackson fit in seamlessly.

It takes some time before you are captured by the appealing charm of her music. Jazmin Black-Grollemund has a warm soprano voice, but her generous vibrato is at odds with the reticent expression so typical of the French mélodie. The intonation of the strings is not always flawless and the dynamics are somewhat uncontrolled. From the sprightly Colombine (Track 13) things become more balanced, the performers sounding more sovereign and confident.

One gets the impression the remaining songs were performed in a concert setting before; surely the preceding ones would also benefit from some more live experience. But these are just minor comments on what is undeniably a loving portrait. Ensemble 1904 breaks a convincing lance for Poldowski, and the excellent cd booklet contains a lot of useful information. May this edition be the prelude to a rediscovery of Poldowski, her music deserves it.

I am a Dutch music journalist, specializing in contemporary music, and a champion of women composers. In 2014 I wrote the biography of Reinbert de Leeuw (3rd edition in 2020) and in 2018 I published 'Een os op het dak: moderne muziek na 1900 in vogelvlucht'.
View all posts by Thea Derks →
This entry was posted in music, review, women composers and tagged David Jackson, Ensemble 1904, IrèneWieniawska, Jazmin Black-Grollemund, Lady Dean Paul, Paul Verlaine, Poldowski. Bookmark the permalink.