On Friday 1 December the piano duo X88 will present the world première of naked, I by Vanessa Lann at a recital in the Amsterdam Bimhuis. The American-Dutch composer wrote it especially for this adventurous piano duo, that performs complex contemporary music as if it were rock. It consists of the Canadian Vicky Chow, pianist in Bang on a Can All-Stars, and the Dutch Saskia Lankhoorn, who is a member of Ensemble Klang.

Like many foreigners, Vanessa Lann (New York, 1968) came to the Netherlands in the nineties, attracted by the vibrant musical life of the time. She is now firmly rooted here, thanks to successful works such as Inner Piece for solo piano (1994), Resurrecting Persephone for flute and orchestra (1999), Illuminating Aleph for cantor, choir and instrumental ensemble (2005), and her opera De Stilte van Saar (Saar’s Silence) in 2013.

Being a pianist herself, she has written many works for grand or toy piano. Four of these can be heard on the portrait cd Moonshadow Sunshadow that was released in 2015. Her work often has a theatrical aspect and Lann likes to fiddle with our expectations. This holds for her new piece for two pianos as well, of which the mere title may evoke confusion. Thus I assumed ‘I’ in naked, I meant the cipher 1, wondering how many pieces there were to follow in this new cycle.

None, Lann tells me. The title refers to the scientific term ‘naked eye’, which describes what the eye can perceive without microscope or telescope. ‘Since there are no electronics, the piece is about the raw/naked/honest expression of two people and two grand pianos. A piano is a big instrument, and the question is whether the two women are in control or not. In an almost ritualistic manner the piece confronts the performers with their capacities, not just as players, but also as individuals.’

Here we touch on a second layer: ‘The prounoun “I” refers to identity, who am I, who are you, how do we relate to each other? Naked, I explores the vulnerability of the players, as well as the power required of them in performance. It is inspired by extremes: when does soft playing become too soft, how long will a certain pattern hold our attention, what is scary, what is funny? In a sense both pianists try to determine who they are in relation to the piano as an instrument, and also to each other.’ 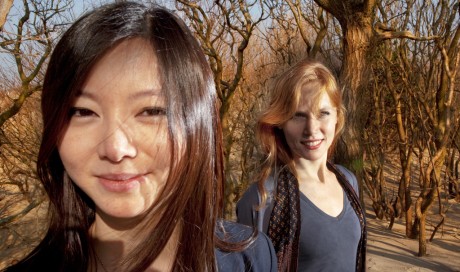 This links naked, I strongly to De Stilte van Saar: ‘In my opera I address the theme of how we deal with our personal and social media identities. We create a two-dimensional, idealized image on Facebook, which we will eventually meet. Thus, in a way we become our Facebook identity. I composed it for Silbersee and Ensemble Klang, in which Saskia Lankhoorn played the toy piano.’

Lann is thrilled by the energy and virtuosity of Lankhoorn and Chow: ‘They can do absolutely ANYTHING, play ANYTHING, they’re quite fearless. But in this work they are “naked”, for they have to show themselves while playing the simplest of patterns.’

Halfway through they change pianos. ‘Like in my piece Moonshadow Sunshadow for two violins, you then hear the same material as before, played on the same instrument, but by a different performer. In what way does it sound different the second time: does the character of the pianist play a role in how we listen to the raw material? This question intrigues me: what you see is what you get.’

In their recital the duo will also perform premières by Nik Bärtsch, Tristan Perich and Pete Harden. The concert will be repeated in the Red Sofa series of the Rotterdam Doelen on Saturday 2, and in Korzo Theatre The Hague, as part of the Festival Dag in de Branding on Sunday 3 December.

I am a Dutch music journalist, specializing in contemporary music, and a champion of women composers. In 2014 I wrote the biography of Reinbert de Leeuw (3rd edition in 2020) and in 2018 I published 'Een os op het dak: moderne muziek na 1900 in vogelvlucht'.
View all posts by Thea Derks →
This entry was posted in music, news, women composers and tagged Naked I, Piano duo X88, Saskia Lanhoorn, Vanessa Lann, Vicky Chow. Bookmark the permalink.

2 Responses to Vanessa Lann: pianists ‘Vicky Chow and Saskia Lankhoorn can play anything’