The artist’s duo Gilbert & George had travelled to Amsterdam Stadsschouwburg to witness a spitting image impersonation by Christopher (countertenor) & Nigel Robson (tenor) in The Naked Shit Songs by Dutch composer Huba de Graaff. She based her opera on a literal transcript of a television interview of Theo van Gogh with Gilbert & George in 1996. It was premièred in the Holland Festival to great acclaim on Thursday 22 June, and can be heard there once more on Friday 23 June. 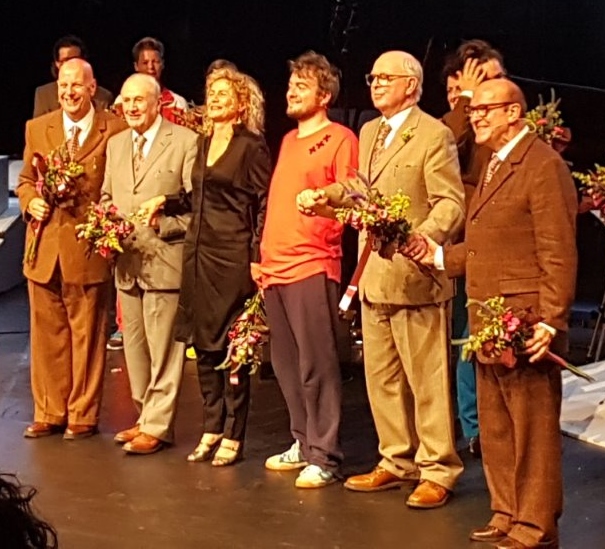 I interviewed De Graaff for the programme book, and for a pre concert talk (it was streamed live, see below).

In 1969 Huba de Graaff saw Gilbert & George posed as living sculptures on the stairs of the Stedelijk Museum Amsterdam, in 1996 she perused their Naked Shit Pictures in the same venue. Now she presents her opera The Naked Shit Songs, based on an interview of Theo van Gogh with the artists about this controversial exhibition. De Graaff: ‘Art must be provocative.’

Huba de Graaff (Amsterdam, 1959) operates somewhat in the margin of Dutch musical life, creating music theatre on a wide variety of subjects most people would not readily associate with opera. Electronics and visuals are a given, often examining the relation between man and machine. In her opera Lautsprecher Arnolt (2003) the main roles are performed by loudspeakers; in The Death of Poppaea (2006) cameras abound; in Liebesleid (2017) a woman trains off her lovesickness, panting and puffing away during a fierce workout in a fitness centre.

A recurrent theme is the relation between speech and song. De Graaff: ‘To me it’s clear that singing came first, and that our spoken language developed from this over a long period of time. This is not only evidenced by the tone languages that have survived to this day, but also by the fact that both children and demented elderly people sing. Singing makes it easier for us to remember and cherish important events.’

To prove her point De Graaff studied the way monkeys communicate, basing her Apera (2013) on her findings: ‘Surprisingly their shrieks and shouts at times come very close to renaissance polyphony.’ She went a step further in Pornopera (2015), crafting the libretto from the lustful moaning and groaning of a copulating couple. Or, in her own words: ‘everything that happens with your voice BEFORE you start singing’. In The Naked Shit Songs she approaches the theme from the opposite angle: ‘I call it a “retropera”, because now I’m turning spoken language into song.’

The idea for the opera was suggested by the actor/singer Jan Elbertse, with whom she had worked before. ‘In 1996 he had videotaped a television interview from Theo van Gogh with Gilbert & George on their exhibition The Naked Shit Pictures. I am a great admirer of theirs, and was fascinated by how light-heartedly they discuss precarious themes such as love, tolerance, homosexuality and Islam. I decided to set the entire interview to music, including all the repetitions, hesitations and slips of the tongue. It took me a month to type everything out.’

Van Gogh was controversial because he was a thoroughbred provocateur, openly ranting against Islamic people, sometimes even calling them backward goatfuckers. De Graaff: ‘I absolutely abhor such aggressive statements. Fortunately he refrained from them in his talk with Gilbert & George, for he was a great interviewer. He asked the right questions, putting his guests at ease while avidly smoking cigarette after cigarette.

You see Gilbert & George gradually relax, even becoming a bit tipsy in the end. I was struck by how much our world has changed since 1996. Nowadays it’s unthinkable anyone would smoke or drink alcohol on television, let alone innocently address politically incorrect subjects. Since 9/11 and the assassination of Theo in 2004 the Western world has completely lost its innocence.’

While working on the typescript her already high esteem for Gilbert & George intensified: ‘I love their motto “Art is for all”, and how they keep stressing their work should be understandable to taxi-drivers and children. With this in mind I composed very singable melodies.

I’m also impressed by their immense love and tolerance toward mankind. Especially striking is their reiterated praise for Islam, referring to it as a religion of love. They call themselves Christian artists, though admitting to being “very unchristian” and fearing Christian fundamentalists. Thus they continuously raise uneasy issues, which to me is the essence of art: it must ask questions and be provocative.’

Gilbert & George are usually immaculately dressed, but in their Naked Shit Pictures the purebred British gentlemen relentlessly expose their bare buttocks and create images from their own excrements. De Graaff: ‘This inspired me to design a “turd-theme’, a bass run that keeps popping up in different guises, while my musical structure mirrors how they model their turds into strict but florid and beautiful frameworks.’

The Naked Shit Songs has six movements, each comprising exactly a thousand words, preceded by a prologue of fifty and concluded with an epilogue of seventy-five words. This layout may seem haphazard and rational, but was consciously chosen. De Graaff: ‘Thus I avoided for my opera to become kitschy, for it could easily have turned into a mere succession of jaunty songs. Shaping my material into a tough structure made it possible to introduce a new version of the theme with each subdivision.’

The first part is spoken, only after a thousand words Gilbert & George burst into song. De Graaff: ‘They start on a scream that follows their explanation of how they make their images: …we go into a black bag. And inside this bag we shout: Aaaaaah! Halfway through also Theo starts singing. They are accompanied by a musical ensemble of double bass, piano, synthesizer, electric guitar and percussion, and a choir that doubles their lines or interjects its own comments. For this I engaged the GALA-Choir, consisting of gay and lesbian singers.’

Because of the frequent references to Islam, the composer was convinced she also needed a choir with a Muslim background. This proved less simple to realise than she’d thought: ‘I have many Kurdish friends who drink alcohol and come to see my opera’s. They were not daunted by Apera or Pornopera and responded enthusiastically when I told them about my Naked Shit Songs.

Some of them were even willing to sing in the ‘Muslim choir’, yet after reading the libretto they demurred. They condemn Theo’s murder as a matter of course, but it’s one thing to be open-minded and another to ignore how deeply he had offended the Quran. I had underestimated the pressure they feared to encounter from the Islamic community. At the time of the interview there was still a dialogue, now everyone is continuously walking on eggshells.’

Precisely for this reason she became even more determined: ‘In these troubled times dialogue is absolutely indispensable, on all possible levels. So I vented my disappointment to my local Turkish grocer: Why can’t I find a Muslim choir? This proved to be a stroke of luck. He suggested contacting Selim Dogru, a Turkish-Dutch composer who leads the reART World Music Choir. Selim at once agreed to take part in my opera, as did his singers, who all read the manuscript closely. They know exactly what it’s about and consider it an important project.’

The ‘Muslim choir’ enters towards the end of the opera, where the murder of Van Gogh is subtly suggested. De Graaff: ‘An electric guitar solo sets in. Gilbert sings: It’s finished, it’s dead. Theo gets up and leaves the table. Pandemonium breaks loose. Wham! Wham! Wham! The choir belts out: money, race, sex, religion, while Gilbert & George once more stress how kind Muslims are.

In the end we shortly hear Theo’s real voice: So that’s why you love to be surrounded by Muslim people? Then things quieten down, and everyone sings along with the ‘Muslim choir’: Imagine the lives of all the people at this moment in the world, wherever they are. These were George’s last words in the interview. It’s such a powerful and soothing text, but each time I hear it I get goose bumps, for we all know what happened hereafter.*

My pre concert talk with Huba de Graaff was streamed live on YouTube.