The German guitarist Heike Matthiesen (1969) took music in with her mother’s milk. She was taken to the opera from an early age and started playing the piano when she was four years old. At eighteen she decided to pick up a guitar study. She showed a natural talent and was a master student of the renowned Spanish guitarist Pepe Romero. During her studies she played plucked instruments at the Frankfurt Opera and recently she presented her fourth solo album: Guitar Ladies.

In her preface Matthiesen writes: ‘I have chosen music which I like, and I love to play.’ She selected works of nine – female – composers, including six guitarists. The title Guitar Ladies is just as obvious as it is aptly chosen. Matthiesen writes she purposely avoided ‘demonstrative virtuosity’, selecting ‘pure music’ instead. This purity lies in the ‘extreme sensual sonority, which cherishes the silence between the notes’. Well said, for the pieces pair a mellifluous soundworld to a beguiling sensuality. 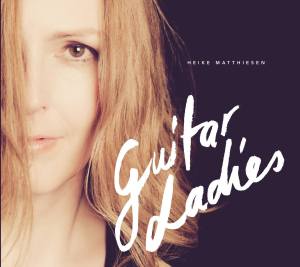 The CD opens with seven Songs without words by the German-British guitarist and composer Madame Sidney-Pratten (1821-1895). She began her career as Catharina Josepha Pelzer in a famous guitarist family. She gave concerts as a child prodigy and married a British flutist when she was 33. She moved to England, where she became a celebrated guitar soloist, composer and teacher, mentoring even the daughters of Queen Victoria. Her charming Songs abound in tuneful melodies, bathed in langourous melancholy.

From here Matthiesen takes us on a trip along another fifteen compositions, by e.g. the French guitarist Ida Presti (1924-1967), who is represented by Segovia. She dedicated this piece to the Spanish guitar king Andrés Segovia, and its dark harmonies and nimble strumming reference the work of the master. The unexpected melodic twists in the subsequent Serenade Sofia Goebaidoelina (1931) sound even more ‘Spanish’.

Although not herself a guitarist, the Czech Sylvie Bodorová (1954) has a great affinity with the guitar, for which she wrote two solo concertos. Her deeply melancholic Pocta Kolumbovi – Elegy harks back to Spanish models, especially flamenco.

The Argentine Carmen Guzman (1925-2012) was also inspired by folk music. Her Tangos and Waltzes are again very melodic, but have a bit more spunk. A contemplative atmosphere pervades Tendresse of the Dutch Annette Kruisbrink (1958) and the otherwise lighthearted Waltz in the little café of her Polish colleague Tatiana Stachak (1973).

The CD concludes with four works of the British-German Maria Linnemann (1947), whose Two Elegiac Pieces are dedicated to Matthiesen. Linnemann composed these intensely lyrical pieces at her request, for the project ‘Orpheus and the Power of Music’.

With her superior technique and warm tone Matthiesen is the ideal advocate of these relatively unknown composers. It is laudable she should promote their music, yet her choice for sensual, lyrical sounds has one drawback: there is little contrast between the different compositions. Halfway through the CD I found myself craving for some shrill dissonance or a relentless beat.

Moreover the selection is a tad stereotypical: music composed by women is sweet, elegant, and harmless. Undoubtedly this is unintentional, and it does not diminish Matthiesen’s excellent performance. – For those who like to swoon away to romantic guitar music, Guitar Ladies is the perfect CD.