In spite of fierce galactic gales, a substantial audience had found its way to the Amsterdam Muziekgebouw aan ‘t IJ on Thursday 23 February. They had good reason to defy the weather warning – code orange – because the Flemish instrumental ensembles Het Collectief and vocal choir Psallentes presented a double bill of Hildegard von Bingen and Galina Ustvolskaya.

Though to my knowledge the music of the medieval nun and the quirky 20th century Russian composer was never before combined, this is less unlikely than it may seem. Both composed from a deeply felt inner necessity and transcended the limits of convention. Both were deeply inspired by their religion, the difference being that Von Bingen composed for the liturgy of her own nunnery, while Ustvolskaya cherished a rather more personal relation to God.

Von Bingen’s swirling melodies far outreach the rather more introverted Gregorian chant of her day. In the face of Ustvolskaya’s furious hammerings even the pained outcries of her teacher Shostakovich pale.

As pianist Thomas Dieltjens of Het Collectief and Hendrik Vanden Abeele, leader of Psallentes pointed out during our pre-concert talk: both ladies only accepted accountability to themselves. However different their musical language may be, both were radical in their views, each in her own, existentialist way. 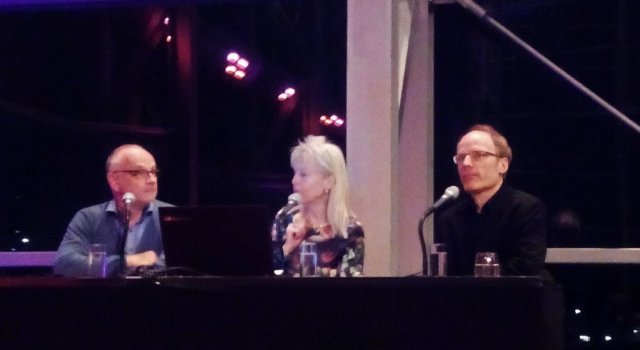 Dialogue rather than clash

Rather than making Von Bingen’s heavenly singing clash with Ustvolskaya’s relentless gruntings, Dieltjens and Vanden Abeele sought to establish a dialogue. Ustvolskaya may be called ‘the lady with the hammer’ because of her often extremely loud dynamics, yet there are moments of utter quietude, too. Suddenly the markings drop to quadruple, fivefold or even stronger pianissimo, and ethereal lines rise up to heaven from this stillness.

Dieltjens and Vanden Abeele hunted out these moments in Ustvolskaya’s Trio, Grand Duet, Composition nr. 1 and Piano Sonata 6, and used them to spark off nine chants from Von Bingen’s Ordo Virtutum. In this first ever mystery play a righteous soul fights off the temptations of the devil with the help of the virtues. The – spoken – part of the devil was not included, since Vanden Abeele considered Ustvolskaya’s unsettling sounds could easily represent his role.

Tapestry of celestial and abysmal sounds

The ‘devil’ takes the stage in the form of Thomas Dieltjens, furiously banging away on his concert grand in Piano Sonata 6. After five minutes the loud and dissonant clusters abruptly give way to a soft and wistful melody, and offstage the women’s voices start singing ‘O antiqui’. It’s a striking moment of sheer beauty, causing goose bumps all over.

In some 80 minutes the two ensembles weave a tapestry of celestial and abysmal sounds, in which the wonderfully pure voices of the choir cleverly intermingle with the instruments. 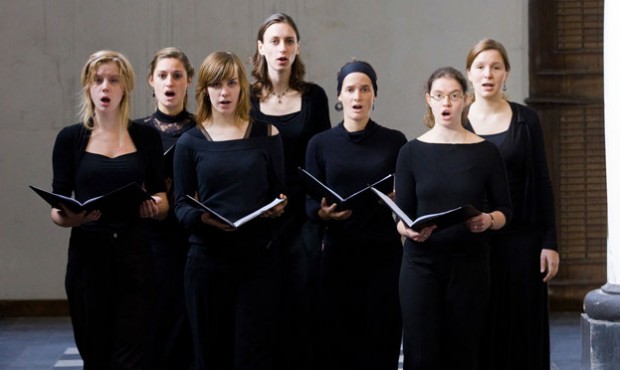 Sometimes the ensembles echo or imitate each other’s parts, the choir even presenting some modern, dissonant polyphony. At other times the instrumentalists generate sensitive, improvised murmurings to soften a harsh transition. Thus the sound worlds of Von Bingen and Ustvolskaya seem to merge naturally.

Psallentes is an amazing choir, with perfect pitch, homogeneity and concentration. The singers are counterbalanced by the fine musicians of Het Collectief, who defend Ustvolskaya’s music with admirable gusto. Yet I’m in two minds about the result, for in the long run the returning improvisations take on an aspect of new age, making my attention waver.

And however ingeniously Ustvolskaya’s music is cut up and interspersed with Von Bingen’s, gradually I’m numbed and start longing to hear at least one integral piece of hers.

Psallentes and Het Collectief can’t be praised enough for bringing the music of Von Bingen and Ustvolskaya together, a daring and visionary experiment. Still, I’d be very much interested in a concert where they are simply presented next to each other. Both may be the stronger for it.

I was interviewed for NPORadio1 on this concert.

Thea Derks is a Dutch music journalist, who studied musicology at Amsterdam University. She' specialized in contemporary music and always has an eye open for women composers. In 2014 she wrote the biography of Reinbert de Leeuw and in 2018 she published 'Een os op het dak: moderne muziek na 1900 in vogelvlucht'.
View all posts by theaderks →
This entry was posted in music, review, women composers and tagged Galina Ustvolskaya, Hendrik Vanden Abeele, Het Collectief, Hildegard von Bingen, Psallentes, Thomas Dieltjens. Bookmark the permalink.